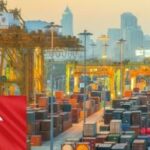 On July 14, 2020, President Trump issued an executive order (EO) that stripped Hong Kong of its different and preferential treatment from mainland People’s Republic of China (PRC or China). In accordance with the 1984 Sino-British Joint Declaration, the city of Hong Kong’s sovereignty was handed over to mainland China from the U.K. in 1997, but as an autonomous city with a largely separate legal and economic system from mainland China.

Uyghur Forced Labor Prevention Act – What You Need to Know

Incursion and World Trade, Part 4: Are India and China Coming to Putin’s Rescue? The New Elephant in the Room

Relations Between the U.S. and China In One Word, Dismal Is a Decline in Trade Inevitable?

Is Your Company in Compliance with US Immigration Form I-129 EAR / ITAR Certification Requirements?

Evaluating the Efficacy of Sanctions on Russia