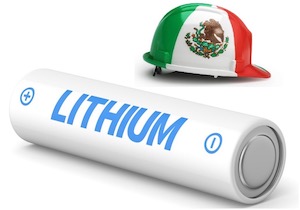 In November 2022, Mexican Foreign Secretary Marcelo Ebrard and U.S. Special Presidential Envoy John Kerry announced at COP27[1] in Sharm el-Sheikh important steps forward to address the climate crisis.  Representatives from both countries, including the state governor from Sonora and his cabinet, continued discussing important topics which resulted in agreements to cut emissions, increase investment, and promote the creation of clean energy.

To achieve this, Sonora may be the key.  Sonora is a state located in the north-west part of Mexico and has one of the largest Lithium deposits in the world. Lithium is known as the “white gold” because it has the ability to store and transfer  great quantities of energy.  It is also a mineral required to produce batteries for electric cars. Due to the fact that there is a substantial need for energy storage that can only be produced if Lithium is available in sufficient quantities, its demand keeps rising.

Sonora is now considered among the world´s top lithium suppliers and has the potential to produce several million tons of lithium carbonate product annually and therefore will become a significant supplier of battery-grade lithium and by products to growing industries like electric vehicles (EVs) and energy storage.

To take advantage of the Lithium deposits, the government of Mexico has created a sustainable development program to attract multinational investors. This interest however is not limited to Lithium as it also includes natural and human resources that enable a long-term project to be implemented with different parties that may use clean energy to innovate the electromobility and semiconductor industries.  For this reason, it is preparing the infrastructure and resources required to fulfill the needs of global markets.  For example, it is expanding and constructing roads, customs checkpoints, seaports, industrial parks, photovoltaic parks, logistics and distribution centers, airports, etc. to facilitate the cross-border movement of goods, the growth of business, the increase on the value of operations, number of investments for large and new industries, the creation of jobs, expansion of business, and wellbeing of the population, etc.

The Renewable Energies Integral Development Plan, is aimed to reinvent the automotive industry, by replacing combustion engine vehicles for electric ones, supplying the automotive electric industry, producing batteries with a sustainable project that reduces the impact on the environment, but overall to strengthen the norther border relations between MX and the United States.

In addition, the Mexican government created a public entity from the federal public administration called “Litio para Mexico (LitioMX)” with the purpose to extract, explore, benefit and take advantage of the Lithium, as well as the administration and control of the economic value chains of such minerals.  Nonetheless, this entity is allowed to set forth, maintain and promote relations with other national and international entities who will be able to partner with other domestic and international companies for the industrialization of the Lithium.   For example, if a company wants to produce electric automobiles, it may partner with a company to produce the vehicles in Sonora while taking advantage of the Lithium supply and availability.

The initial stage of this project is launched in Sonora, but the idea is to expand it and replicate within the rest of the country

Although the representatives from Mexico have presented this project as one of the largest and more importantly, one that could change the future of the country, others believe it as not  realistic, and that Mexico does not have the have the recourses to launch a project of this nature.  Also, there have been risks identified that could impact delivery or economics which need to be managed, such as new border and customs clearance requirements or delays that do not currently exist.

Bacanora CEO Peter Secker said: “Recent research reports predict the lithium industry would need US$30 billion in investment in upstream capacity to meet its forecast of 1 million tons of supply by 2025 (a threefold increase in current levels). In order to secure funding, any new lithium project needs to be low on the operational cost curve, without having to rely on byproduct credits to artificially lower that cost per ton. The project also needs to have reliable engineering cost estimates. It also needs to be of sufficient scale, in a location with a favorable environmental and political climate and deliver a high-grade end product. The Sonora Lithium Project is one of the very few projects globally that can deliver on all of these factors.”

If your company is interested in learning more about this business industry in Mexico and would like to participate, this might be the best time to do it.  However, please note, that things have changed in Mexico and before entering into a business in this country, you should be well informed about the legal and administrative requirements that may impact your business plans.  This would be one of the best ways to protect your business.

[1] It is the 2022 United Nations Climate Change Conference, with a clear recognition of the gravity of the global climate challenge and appreciation of the value of multilateral, collective and concerted action as the only means to address this truly global threat.