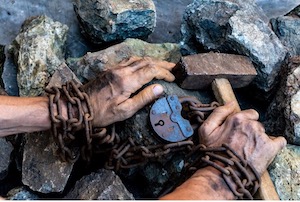 I. An Introduction to Forced Labor Laws and Enforcement for Imported Merchandise in the United States

The U.S. law prohibiting imports of goods made with forced labor is Section 1307 under Title 19 of the United States Code. Since the Trade Facilitation and Trade Enforcement Act in 2016 that repealed the statutory exception that allowed many products made using forced labor to enter the U.S., CBP has ramped up enforcement of products made using forced labor, which are primarily from China.[1] Since then, CBP has issued over 50 Withhold Release Orders (“WROs”), assessed millions in civil penalties associated with forced labor products, and detained over 900 shipments under the authority of those WROs and Findings. The major industry areas that are targeted for U.S. forced labor enforcement include cotton and other textiles, cell phones, computers, electronics, and foodstuffs and seafood.

1.1) Defining Forced Labor
Although forced labor is defined under U.S. law under 19 U.S.C. 1307, much of the terminology surrounding forced labor is defined by international law in the Forced Labor Conventions administered by the International Labor Organization (ILO).[2] The term “Forced labor” is defined as all work or service which is exacted from any person under the menace of any penalty for its nonperformance and for which the worker does not offer himself voluntarily.[3] The term “forced labor” includes slave labor, but also includes forced or indentured child labor and indentured servitude.[4] As defined by the ILO[5], the phrase “menace of any penalty” refers to a wide range of penalties used to compel someone to work. The phrase “offered voluntarily” means the free and informed consent of a worker to take a job and his or her freedom to leave at any time.[6]

The ILO has published several indicators that forced labor is occurring, including debt bondage, abuse of worker vulnerabilities or disabilities, withholding of identity documents and wages, restriction of movement, intimidation and threats, physical and sexual violence, abusive working and living conditions, and excessive overtime.[7] However, certain types of nonconsensual labor do not fall under the ILO’s definition of “Forced Labor,” such as community service imposed by a court of law, work in an emergency (such as war, fire, flood, famine, or earthquake), prison labor under supervision and control of a public authority, and normal civic obligations (such as compulsory military service).[8]

Under U.S. law, penalties for importing goods made using forced labor are severe and can include issuance of new import restrictions (such as WROs and Findings), the detention/seizure/forfeiture of violative merchandise, civil penalties for entering merchandise contrary to law under 19 U.S.C. 1595a(b), up to 20 years of imprisonment for individuals under 18 U.S.C. 1589, and revocation of import privileges, such as bond or CTPAT privileges.

For an example of penalties for importing goods made using forced labor, in 2020, CBP collected $575,000 in penalties under 19 U.S.C. 1595a(b) from Pure Circle U.S.A., Inc., who was found to have violated a WRO targeting a Chinese company named Inner Mongolia Hengzheng Group Baoanzhao Agricultural and Trade LLC (“Baoanzhao”) after an investigation into twenty of Pure Circle’s stevia shipments. Another example includes a seizure at the port of New York/Newark of 13 tons of hair products worth over $800,000 in 2020 that were imported in violation of a WRO on hair products from Chinese company Lop County Meixin Hair Product Co. Ltd.

CBP can issue WROs and Findings after investigating[9] foreign companies that use forced labor, which prohibit the goods made by those companies to enter the U.S. The goods that are subject to a WRO or Finding are subject to detention, seizure, and forfeiture by CBP if the goods are imported into the U.S.

The most notable[10] and comprehensive WRO in effect is the Hoshine Silicon Supply Chain WRO, which applies to “silica-based products made by Hoshine Silicon Industry Co. (Hoshine) and its subsidiaries as well as to materials and final goods derived from or produced using those silica-based products, regardless of where the materials and final goods are produced.” The WRO further specifies that the prohibition applies to all products in the company’s supply chain, including component materials (such as silicon, including metallurgic grade silicon, silicon oxide and certain silicones in primary forms), intermediate goods (such as additives for aluminum alloys and concrete, integrated circuits,  and semiconductor devices), and finished Hoshine goods (such as adhesives, electronics, lubricants, photovoltaic cells, solar generators, solar panels, and parts thereof). The most guidance on forced labor compliance comes from this WRO, including a highly detailed WRO description, frequently updated FAQs, and a detailed importer guidance document.

2.3) Disposition and Proof of Admissibility

When merchandise is detained under a WRO, it must be exported within three months after the date of importation, or the importer must prove that the goods were not made using forced labor. If the detained goods are not exported or sufficient proof is not offered related to forced labor used in the production of the goods, the merchandise will be deemed abandoned and destroyed by CBP. Merchandise detained under the authority of a Finding cannot be exported to comply, and the importer must prove admissibility or abandon for destruction.

Under 19 C.F.R. 12.43, to prove that goods were not made using forced labor under a WRO or Finding, the importer must provide the following two documents within three months of the date of importation.

2) Affidavit that No Forced Labor was Used – The importer must submit a statement from the ultimate consignee of the merchandise that must contain the following components within three months of the date of importation:

i) Describe in detail how the importer made every reasonable effort to determine the source of the merchandise and of every component to ascertain the character of labor used in the production of the merchandise,

ii) The full results of the importer’s investigations regarding forced labor, and

iii) A statement of the importer’s belief that no forced labor was used.

Under 19 C.F.R. 12.43(c), if CBP is satisfied with both documents described above, it will grant release of the goods to the importer. However, if CBP is not satisfied and continues to believe the goods were made using forced labor, the merchandise will be subject to seizure under 19 C.F.R. Part 162.

The Uyghur Forced Labor Prevention Act (“UFLPA”), which took effect on June 21, 2022, bans the importation of all goods made in the Xinjiang Uyghur Autonomous Region (“XUAR”) in China. Goods imported from the XUAR or goods whose inputs, raw materials, or components are made from goods from the XUAR, CBP will presume that those goods were used using forced labor and is directed to seize the goods upon entry. The UFLPA tapped the Forced Labor Enforcement Task Force of the Department of Homeland Security to create a UFLPA Strategy for future enforcement actions pursuant to the UFLPA and maintain an UFLPA entity list, which can be found on the DHS website here: https://www.dhs.gov/uflpa.

3.1) The Presumption that goods made in the XUAR are made using forced labor

The UFLPA creates a statutory presumption that any good made in the XUAR is made with forced labor. This means that all goods made in the XUAR, including goods produced with raw materials, inputs, and subassemblies made in the XUAR are banned from entry into the U.S. This rule goes broader than the product specific Withhold Release Orders issued by CBP covering tomatoes and cotton products from the XUAR. Using the UFLPA presumption and its authority under 19 U.S.C. § 1307, CBP can now seize goods it believes were made in XUAR, destroy those goods if they are not exported (absent proof of no forced labor), issue penalties against the importer, revoke import privileges, and investigate and audit importers that it believes are importing goods from XUAR.[12]

3.2) Exemptions to the UFLPA Presumption

If CBP determines the importer has met all three elements above, CBP will grant the release of the merchandise as an exception to the presumption of forced labor used to produce the merchandise made in the XUAR. The information submitted by the importer is subject to public disclosure and must be reported to Congress under Section 3(c) of the UFLPA.

Clear and convincing is evidence that is highly and substantially more likely to be true than untrue; the fact finder must be convinced that the contention is highly probable. There are two recent CBP Rulings that give us some insight as to what evidence CBP needs to determine that goods were not made using forced labor.

In Customs Ruling HQ H317249 (May 5, 2021), CBP determined the importer, Proof Apparel, did not provide clear and convincing evidence that its goods were not made by North Korean laborers in violation of the CAATSA. Proof Apparel provided an independent audit of the factory that produced the goods, photos of the employees, and photo-ID cards of the employees of the factory. However, CBP did not find this evidence creditworthy because the auditors only interviewed 10 out of the 49 workers during the audit, there were inconsistencies in the reports of the number of employees at the factory, CBP believed the photos provided showed conditions of Korean forced labor camps, and the photo-ID cards did not show the nationality of the workers.

In Customs Ruling HQ H318182 (May 10, 2021), CBP held that Uniqlo Co. did not prove that the product was made without using forced labor in accordance with the Xinjiang Production and Construction Corps (“XPCC”) WRO. CBP determined that a list of production steps and production records for the yarn, including records that identified the cotton and cotton producer of the raw cotton, transportation documents from the cotton grower to the yarn maker, supporting documents related to employees that picked the cotton, their timecards, wage payment receipts, and daily process reports that related to the raw cotton sold to the yarn producer would be required to prove the goods were not produced by means of forced labor. CBP held that, although Uniqlo provided documents of the sale, acquisition, source location, transportation, and delivery of the raw cotton used to produce the clothes, Uniqlo did not provide documents showing that no forced labor was used in the growing and harvesting of the cotton.

The above rulings demonstrate that it can be exceedingly difficult to prove that no forced labor was used by clear and convincing evidence if the goods are from the XUAR or if CBP has already made up its mind that the goods were made using forced labor given the current evidence. The burden of providing clear and convincing evidence could include obtaining lab testing reports of the contents of the products (such as type of cotton DNA) and intense upkeep of foreign factory documentation, such is not customary practice for many importers.

3.4) Procedures for obtaining exceptions to the UFLPA Presumption

Below are the actions, measures, and documentary proof that Braumiller Law Group recommends for importers to prove to Customs that their imported merchandise was not made using forced labor and comply with U.S. forced labor laws:

Trace the origin of the goods and their components by compiling a detailed document trail including, but not limited to, the following types of documents and information.

Below is a comprehensive list of web links to resources concerning compliance with U.S. Forced Labor laws for imported merchandise.

[1] Prior to 2016, Section 1307 contained an exception that allowed for the importation of merchandise produced with forced labor if the goods were not produced in sufficient quantities in the United States to meet the consumptive demand of the United States.

[9] For more on the investigation timeline and process for WROs and Findings, visit CBP’s at https://www.cbp.gov/sites/default/files/assets/documents/2021-Sep/Slicksheet_Forced_Labor_timelines_investigative_benchmarks_508Compliant_Pub_2.pdf.

[10] The UFLPA superseded the WROs related to XUAR for goods imported after June 21, 2022. See below.

[12] The UFLPA is not the first forced labor statute to establish a presumption that goods in a geographic region are made with forced labor. For example, in 2017, Congress enacted a presumption of forced labor for North Korean labor via the Countering America’s Adversaries with Sanctions Act (“CAATSA”).