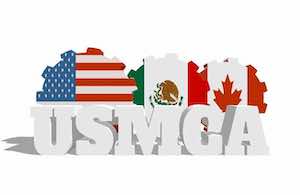 The North American Free Trade Agreement (NAFTA), was effective until June 30, 2020 and was replaced the following day by the United States, Mexico, Canada Agreement (USMCA).  These treaties were mainly created to facilitate trade between member countries and govern various related topics such as customs procedures and rules of origin.

Starting July 1, 2020 companies located in any of the three countries wanting to receive duty preferential treatment for importing goods originating in any of these three countries would be required to stop issuing and using NAFTA certificates of origin and instead issue and use USMCA certifications of origin.  However, companies that issued and used NAFTA certificates of origin before the end of the effectiveness of this treaty need to be aware that they still have to make sure operations comply with the NAFTA customs procedures and rules of origin.  Thus, the customs authorities of the member countries may investigate companies´ compliance with the customs procedures and rules of origin and initiate a new origin verification proceeding against any exporter and/or producer or against the importer that used a NAFTA Certificate within a 5 year retroactive period of time from the effective date of the USMCA. In addition, Customs may continue investigating any open matters initiated prior to that retroactive period of 5 years until a final decision is issued and is deemed to be binding and valid.

In Mexico, the NAFTA origin verification proceedings are implemented and initiated by the corresponding customs authority’s office within the Administration General de Auditoria de Comercio Exterior, from the de Servicio de Administation Tributaria against Canadian or United States exporters and/or producers.  Normally, Mexican Customs sends the targeted company a written questionnaire, or an onsite visit request, (though within the last years they have limited the verification proceedings to written questionnaires). These proceedings are aimed to determine whether the goods listed under the NAFTA certificates issued by those companies comply with NAFTA rules of origin and customs procedures.  To do this, Mexican Customs requests from the exporters and/or producers, records that support the NAFTA origin of the goods, including those records related to the a) purchasing, cost, value and payment of the good they export to Mexico, b) purchasing, cost, value and payment of the materials used to produce the good they export to Mexico and c) production of such good.

After the corresponding proceedings have been completed and exhausted, Mexican Customs will issue a final decision determining whether the company demonstrated compliance.  If the company proved its compliance, SAT will close the case and the certificate of origin shall be deemed to be valid.  However, if Mexican customs determines the targeted company did not demonstrate NAFTA compliance, it will issue a final decision stating the NAFTA preferential treatment for the goods subject to verification is inadmissible, and therefore the certificates of origin issued by the Canadian or United States company are invalid.  It is important to note, this decision should not be considered to be binding and valid until the statutory time to challenge has expired and the company did not defend itself by challenging such decision through any of the available legal remedies: 1. recurso de revocacion (motion to reconsider), 2. a juicio de nulidad (nullification lawsuit) and/or 3. an amparo –similar to a US habeas corpus), or if after exhausting these remedies, a court rules the exporter and/or producer did not prove its compliance.

Other than the above, Mexican customs will not do anything against the Canadian or United States Companies that issued the invalidated NAFTA certificates because it is legally forbidden to impose any sanctions outside the Mexican territory.  Instead, Mexican customs will use the final decision as the legal support needed to initiate proceedings against the Mexican importers that relied upon those NAFTA certificates to request duty reduction preferential treatment for the importation of such goods into Mexico.  These proceedings will be aimed to investigate and collect from the importers the duties, taxes, and fees they did not pay for the importation of the goods listed on the certificates of origin issued by the Canadian and United States companies.

After the Mexican company is informed about a final binding decision, they may also defend themselves from the Mexican Customs authorities by filing any of the above legal remedies.  The process and procedures within the legal remedies become a unique and special type of legal matter because the final binding decision to collect from the Mexican importers is in fact a sanction issued for a violation of NAFTA committed by a third party (Canadian or United States exporters and/or producers) located outside Mexico.  Whether the exporters or producer in fact violated NAFTA is a different topic that will not be discussed in this article, but a considerable number of United States companies have complained about the way Mexican customs makes its decisions.

When preparing the legal defense of the case, Mexican importers encounter numerous challenges, such as having to prepare a detailed, comprehensive response within a statutorily-based (short) period of time coupled with the complication of not having access to all the information furnished by the exporter and/or producer to Mexican Customs, making this process a chaotic one that’s detrimental to the Mexican importer.

In some cases, importers may want to prove that the sanction imposed against them by Mexican customs is in violation of the legal principles and elements of law, because this would make the sanctions unconstitutional and illegal.  The arguments that the importer may assert vary depending on the facts and the strategy it wishes to pursue.  For example, it may argue that the sanctions imposed by Mexican authority is in violation of the legal principles of justice, certainty, etc.  These legal principles help identify the limits of Mexican customs’ authority, guide interpretation of the law, among other relevant aspects to establish when a certain act is constitutional or not.  Legal procedures in Mexico tend to bring a high level of uncertainty to possible outcomes because the Government tends to focus on the form rather than on the substance of the case (meaning that despite the preponderance of evidence demonstrating compliance, a technical failure as to form could invalidate the NAFTA claim).

This is but a brief overview of the implications that companies who issued NAFTA certificates of origin or that claimed preferential treatment prior to June 30, 2020 may encounter should they be the subject of an origin verification proceeding in Mexico.  Thus, companies that used NAFTA within the established retroactive period should ensure their records are well-organized, maintained in a manner to be readily accessible since Customs authorities can still review operations within this period.  To do otherwise, means that any such verification will  be burdensome, time-consuming and costly.

This article was prepared on December, 2020.  It is presented to you for informational purposes only and is not intended to provide legal guidance or advice.  Please consult with your attorney if you need specific information regarding the above or give us a call, we are happy to assist you.   Please check out for our next article about the customs producers and rules of origin under the USMCA.