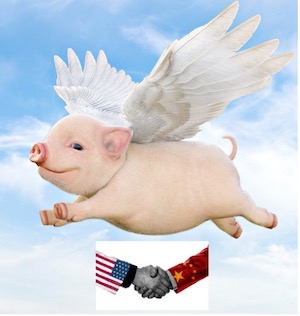 A Meeting of the Minds Between China and the U.S. Perhaps in the Near Future? When Pigs Fly

One would think, if from another planet, or part of the world that is sheltered completely from global information on economies, that a crisis like a worldwide pandemic could bring two superpowers together in battle to fight a common enemy. Nope. We are, the U.S. and China, growing more distant by the day on many key issues, inclusive of trade, which obviously makes a potential resolution on the tariff war very unlikely at any point in 2021. Some say we are practically on the verge of a cold war. What exactly that would look like in this semi-post pandemic world is anybody’s guess.

At a glimpse in recent events, Secretary of State Antony Blinken opened the discussion with China’s administration officials in Anchorage, Alaska where the two countries met to open dialogue by noting that the U.S. would like to highlight its major concerns with actions by China, including human rights violations regarding the Uyghurs in China’s western Xinjiang province, the squashing of democracy in Hong Kong, intellectual property theft, digital trade issues, the fate of Taiwan, cyber-attacks on the United States, forced labor issues, military action in the South China Sea, ongoing violations and economic coercion in general toward our allies.

Yang Jiechi, director of the Central Foreign Affairs Commission of the Chinese Communist Party, said the U.S. “does not have the qualification to say that it wants to speak to China from a position of strength.” Ouch!

So, to say that things didn’t go so well recently in Alaska, is an understatement. Although we may agree on environmental issues, and N. Korea being a threat to world peace, we are worlds apart when it comes to global scale cooperation. One could also add at this point the recent impeding of the investigations of the WHO into the origins of the virus, which definitely hasn’t helped. To say the least, China isn’t really that concerned with what the U.S. wants, and/or thinks, as they have very broad shoulders, and bragging rights these days when it comes to the developing world economies.

It goes without saying, but I am going to say it anyway, the U.S. is not perfect by any stretch of the imagination, and our reality (pre-negotiation with anything related to trade) is that we are dependent on China for a veritable plethora of manufactured goods. (Roughly $345 billion was imported, and $124 billion exported in trade with the Peoples Republic in 2020 according to the U.S. Census) When it comes to American’s buying habits that are deeply entrenched in the middle class of our society, they primarily shop for the best price. Therefore, one must keep in mind, from the standpoint of who has the leverage, the largest retailer in the United States is Walmart (Wally World as I fondly like to call it), and 80% of the goods Walmart shoppers purchase originate in China. So, regardless of how the mainstream American shopper may feel about China policy, or the Asian community in general (insert absolutely ignorant crimes against Asian’s here) we are heavily committed to buying Chinese origin products. On the grand scale, China is now the E.U’s biggest trading partner, overtaking the U.S. in 2020, and at the same time, the U.S. is China’s biggest trading partner. In a nutshell, the E.U., China, and the U.S. are very dependent upon one another for goods. So, why can’t we just get along?

Well, just when you thought things couldn’t get any worse between the two countries, the Biden administration recently sounded the alarm on China’s use of what is called a “social credit system,” which serves as a blacklist to punish foreign companies that do not conform to Beijing’s industrial policies, and rates companies on their compliance with Chinese regulatory and enforcement mandates. A negative rating can subject a company to numerous penalties, including increased inspections, denial of certain tax incentives, fines, or restrictions on government permits, according to the USTR. In an annual report created by the Office of the U.S. Trade Representative called the National Trade Estimate report on global trade barriers, it details concerns with the social credit system.

This year, as we make additional attempts to “just get along” there will most likely be a few more discussions between the administrations, with no concrete conclusions reached, no real concessions that come to fruition (like the Phase One agreement shortcoming) or path forward without exchanging tariffs. Katherine Tai, the newly appointed USTR, has no intention of relinquishing anything until she feels that it is both fair and equitable. Quite frankly, I doubt any professional in the trade industry feels like that day is coming soon, much less in 2021, so as previously mentioned, the tariffs remain in place.

In the meantime, China’s leader Xi Jinping, simply makes the point, the East is rising, and the West is declining.” Without first taking offense, one has to think about that first, with intellect, as a U.S. citizen. Where do we actually stand on the world stage at this time, especially when it comes to pointing fingers? If you consider our incredibly poor response on a global scale to the pandemic, as well as our current political and racial divide, not to mention the daily mass shootings, one certainly living in the U.S. (surviving) cannot adamantly disagree.

I realize that this all seems a little pessimistic at this time regarding China and the U.S., but there may still be hope on the horizon if USTR Katherine Tai, who has worked extensively with Beijing on trade in the past, can carve out one issue at a time, and show the world some progress, because in the end, what happens between the U.S. and China on trade has a ripple affect around the globe, and we all need to rebuild economies post pandemic.

As the Biden administration has said, regarding the talks in Alaska, it’s time that we simply lay all of our cards on the table, get all of our grievances out in the open, and see what, if anything, can be resolved. That being said, the Biden administration has made it well known that our strength lies in cooperation with our allies, as we make an effort to rebuild those relationships, as that is another road that needs major repair.