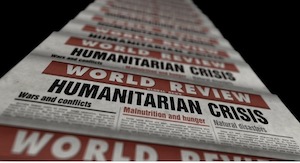 Incursion and World Trade, Part 3: Over 120+ Days into the Global Effect of Inevitable Food Insecurity

Here we are, at the time of this writing over four months into the Russian invasion of Ukraine, with no end in sight. I will personally submit that I am, appalled that this, the murder of innocent civilians and devastation of another country’s infrastructure, can be permitted to continue, as we watch from the sidelines as if it was just another simple documentary on another war. Yes, many nations, like the U.S. are providing support in humanitarian aid and weapons, but the limits that we have put on military participation simply because Ukraine is not a NATO country is ridiculous in my opinion. They were a peaceful and sovereign nation prior this unprovoked attack. NATO or not, the response by the rest of the so-called sovereign and peaceful nations should have been implemented, just like article 5 in NATO, which, yes, I get it, has happened only once (9-11 attack) in its 70-year history. Regardless, it’s 2022, the world has been dealing with a pandemic for 2.5 years and counting, which has killed 6.29 million people to date.

The Russian incursion isn’t just a war that primarily affects just two countries, as we “the world” are tied together in a web of trade as well as those who are in the support of democracy and freedom vs. authoritarian governments. Speaking of authoritarian rule, let’s take a look at how this so-called “de-Nazification” is creating an absolute mess in global trade, not just for Russia via a litany of sanctions, but other parts of the world as well.

For example, Russian ships have now created a blockade at the main Ukrainian port in the Black Sea, which doesn’t bode well for many parts of the world who depend on Ukraine for various importation of agricultural products. Russia and Ukraine are key players in global agricultural trade, as both nations account for a quarter of the world’s wheat exports, (which Africa, as well as Yemen, and other countries in the world depend on) including at least 15 percent of corn exports, and a combined 58 percent of global sunflower oil exports annually. Not to mention, but I will, the Russians have been stealing the grain while much of it also sits to rot via the blockade. (22 million tons according to President Zelensky) The Russians have gone as far to also steal $5 million dollars in farm equipment from a John Deere dealership in Melitopol. However, thanks to modern technology, the equipment was remotely deactivated by John Deere and was useless when it got to its Russian destination.

In my opinion, with very little military background, none actually, but common sense intervenes, it appears that there are a couple considerations here that loom large for ending, or escalating, this conflict, but regardless, it’s time. Let’s just call it, the 12th hour. First, at what point does the U.S., and its allies, make a move to reach “next-level” when the war is now affecting global trade that so many depend on, especially when it comes to food. (Sanctions with Russia included as it makes it hard to actually pay for their goods) “Next-level,” meaning, the blockade at the main port is eliminated in let’s say 48 hours, via Ukraine, but with highly upgraded equipment from the U.S. even beyond the current long range missile delivery. Yes, the Biden administration has been stepping up the kind of weaponry it is offering Ukraine by sending advanced, long-range rocket systems that are now the top request from Ukrainian officials, but it’s still not enough. Putin is calling this a “red-line” that will be crossed, but the saber rattling is falling on deaf ears within the Biden administration. The threat of nuclear war just makes Russia appear absolutely deranged to the rest of the world, as being able to destroy each other’s countries 1,000 times over (U.S. & Russia) is an absolutely ridiculous conclusion to the conflict. (N. Korea is a given in this unstable nuclear threat category, and Iran is apparently no longer negotiable, and is a gnats eyelash from being dead).

Second, at what point does Xi Jinping put a call into Putin and remind his best buddy of the $40 billion pledge he has made to Africa over the next few years, in addition to the billions that have already been poured into the country via the Belt and Road initiative. Xi Jinping has set a goal for China-Africa trade to reach $300 billion annually within the next few years, and Russia is about to set that back a decade with this “disturbance” in the food chain. Regardless of what was exchanged and agreed upon between Xi and Putin during the Olympics, any sane person would have to surmise, the current situation couldn’t possibly have been the plan.

In the meantime, European countries have made efforts to ease the grain export crisis out of Ukraine such as Germany using a “Berlin train lift” to its ports, while Poland opened its borders to grain transshipments to countries directly affected by the war. Romania, which has a port on the Black Sea, also started using it to ship foodstuffs to African countries. As we can clearly see, food prices are already sky high, with no end in sight. If the war stretches on for another 120+ days, there will be millions of people around the globe thrust into poverty. Most economic advisers are already expecting millions of people to go hungry in the areas affected by drought, so the ongoing conflict will simply compound that crisis.

Speaking of shooting yourself in the foot, Russia needs the African alliance as well. Like the arrangement with so many other countries, beyond agriculture, Russia is broadening its influence in African states who are dealing with insurgency by providing military solutions and equipment. Therefore, African leadership is “on the fence” with condemnation of the invasion. Imagine that, Putin’s (Peter the Great 2) war is about to starve your people via a blockade in much needed grain from Ukraine, but you cannot contest it because he also supplies your military. I get it, it’s a tough situation to be in, but at what point do you simply get your weapons and military aid elsewhere? Afterall, an army is no good to you if they have nothing to eat, as Russia has recently been reminded.

The fact is, Russia is the largest exporter of weapons to sub-Saharan Africa in particular. In addition to being the main supplier in the total import volume of weapons to India, Egypt, China, Algeria, Vietnam, Iraq, Kazakhstan, and Belarus, 2017 to 2021. These countries will do their best to turn a blind eye to the invasion and try to keep trade flowing as the U.S. watches closely for any violation of the sanctions imposed on Russia. I personally think Vietnam is going to be in the crosshairs with the U.S. in the very near future regarding violations with the Russian sanctions and walking the tight rope between the U.S. and its largest trading partner, China, comes into play at an even greater display daily. Meanwhile, its weapons come from Russia. It’s interesting to see as this build-up of weapons is primarily due to China causing instability in the region. It’s chaotic at best, but when you compound this scenario with China’s draconian covid lockdown restrictions (only now starting to ease), which are clogging up trade from ports around the world, including theirs, drought plaguing the world via climate change, and just general unrest on a global scale, the last thing we needed was to be dealing with a war. Throw the rotten cherry on top of this mess with prices on gas and food items escalating due to Russian sanctions, and it’s worthy of intervention on a grand scale.

IMO……as usual, the U.S must take the lead and can no longer stand by with any concerns of possibly making a move that will only exacerbate Putin. He crossed the proverbial “red-line” when the first tank rolled into Ukraine territory. In the end, Finland and Sweden, welcome to NATO. That certainly wasn’t part of Putin’s plan. 810 miles of Finland’s border with Russia will now be populated with defensive military equipment and personnel. Of special note, Poland is adding 30,000 U.S. troops simply as supplemental defense. The exact opposite of what Putin wanted. Besides, he has a lot more to worry about now since the EU agreed to ban 90 percent of Russian oil imports by the end of this year. (2022)