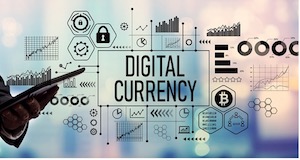 By James Holbein and Justin Holbein, Of Counsel

In a recent article (https://www.braumillerlaw.com/executive-order-digital-assets-start-responsible-regulation/), I provided snapshot of the many reports required by the Executive Order on Ensuring Responsible Development of Digital Assets issued on March 9, 2022.   A major goal of this federal government effort is to assess and analyze the digital asset sector to determine whether it is advisable to develop a central bank digital currency (CBDC). This article provides an overview of the issues surrounding CBDCs in a Q&A format to provide a lens for the analysis of the many government reports due in September, October and through the end of this year.  These reports will look at a CBDC that protects consumers, investors, business, innovative organizations using blockchain technology, while also promoting financial stability, reigning in illicit finance,  leading to enhanced international cooperation around digital assets.

The Federal Reserve is at the center of the analysis and development of any new laws and regulations for any United States CBDC that would be the digital equivalent of a paper dollar but would exist only on balance sheets and blockchain accounts and wallets.

A CBDC is a digital form of central bank money that is widely available to the general public.  “Central bank money” refers to money that is a liability of the central bank. In the United States, there are currently two types of central bank money: physical currency issued by the Federal Reserve and digital balances held by commercial banks at the Federal Reserve.  While Americans have long held money predominantly in digital form—for example in bank accounts, payment apps or through online transactions—a CBDC would differ from existing digital money available to the general public because a CBDC would be a liability of the Federal Reserve, not of a commercial bank. (https://www.federalreserve.gov/faqs/what-is-a-central-bank-digital-currency.htm)

Have any Countries Issued Them?

“As of March 2022, 87 countries are considering issuing a CDBC, according to the Atlantic Council, an independent organization based in Washington, D.C. Out of those, 9 countries —The Bahamas, Nigeria, and 7 countries in Eastern Caribbean Union — have already launched a centrally governed digital currency. About 2 years ago, in May 2020, only 35 countries were thinking of issuing a CBDC.”  (https://www.ndtv.com/business/here-are-the-timelines-and-status-of-central-bank-digital-currencies-in-some-countries-2820164;  see also:https://www.atlanticcouncil.org/cbdctracker/)

As can be seen by the reference above, the United States government efforts to analyze CBDCs could certainly lead to legislation and eventual legal and regulatory requirements.  Should that effort succeed, the digital assets and cryptocurrency sector will finally have a framework that can lead to substantial new investment and participation in the mainstream economy.  The lack of regulation, scams, uncertainty, underdeveloped infrastructure and shortage of open-source code in the sector can be fairly quickly left behind and a new era of enhanced security and adoption could accelerate substantially the progress that has been made already.

The primary benefits for countries to issue CBDCs include:

The major difference for individuals between a CBDC and existing digital and fiat dollars is that no one would need  to hold CBDC assets in a commercial bank account.  This would open the economy to far more participation from unbanked or disenfranchised people.  At the same time, the digital ledgers on blockchain(s) would simplify and speed up transactions and settlement times, adding major efficiencies to the payments system. (See: https://www.fool.com/investing/stock-market/market-sectors/financials/cryptocurrency-stocks/central-bank-digital-currency/)

The main reason people would prefer CBDC over a bank account is that CBDC is not at risk when banks fail. The removal of that risk would be beneficial to individuals and the economy alike. Furthermore, the transfer of money across banks and country boundaries becomes much more straightforward. Various bank systems would not need to interact with each other to facilitate such payments. All that is required is an update of the record at the central bank. This simplicity makes the process faster and cheaper. (https://blog.digitalasset.com/developers/what-is-a-central-bank-digital-currency-and-why-should-people-prefer-cbdc-over-bank-accounts)

Are There Any Potential Problems with Adopting CBDCs?

There are also significant potential issues to resolve through regulation:

A recent pilot program under the auspices of the Bank for International Settlements found that a multi-CBDC platform could be developed, but some harmonization or cooperation among the central banks would be needed to optimize the efficiency of use in the real world.  (https://www.hinrichfoundation.com/research/wp/tech/fast-tracking-blockchain-interoperable-inclusive-trade/)  Such harmonization and common approaches may be difficult to negotiate.  In all likelihood, multilateral agreements will be required, taking years to negotiate, ratify and enter into force among signatory nations over an extended period of time.

The Federal Reserve recently conducted a study, Money and Payments: The U.S. Dollar in the Age of Digital Transformation, January 2022, (www.federalreserve.gov/publications/files/money-and-payments-20220120.pdf).  As part of that study, The Fed requested comments from the public on twenty-two questions involving the potential adoption of a U.S. CBDC.  Hundreds of responses are posted online but wading through them and extracting the truly valuable contributions from the laudatory or derisive remarks with little substantive bearing on the issues will be an arduous process. (https://www.federalreserve.gov/cbdc-public-comments.htm)  This is often the case with notice and comment type rulemaking, as well.  Not surprisingly, some larger players in the cryptocurrency sector are also weighing in with their views in hope of shaping legislation and regulations.

Can We Balance Centrally Controlled Financial Institutions and Decentralization?

One of the key debates surrounding innovation involving blockchain based systems is whether decentralized activity that is at the heart of distributed ledger technology (DLT) can thrive in a financial system that is based on heavily regulated, government authorized central institutions? There is great fear among the innovators that the government will come in and essentially quash the more innovative aspects of cryptocurrency by issuing a CBDC that will remain centrally controlled, provide the means for greater government intrusion into the financial affairs of all people using the CBDC, and crowd out all of the private money represented by cryptocurrencies.

The current situation with cryptocurrencies has been demonstrably afflicted with high levels of fraud, volatile swings in pricing for supposedly stable investments and uncertainty about use, adoption and staying power of the crypto economy.  However, the promise of decentralized cooperation, enhanced and simplified financial transactions, and the inclusion of many people currently disenfranchised from the banking system makes the reports from the government required by the recent Executive Order even more important to lay out the landscape for potential regulation leading to adoption of a CBDC.  It is also critical for civil society, major companies, and other interested players to weigh in with responsible and sensible approaches to implementation that will protect consumers, investors, businesses, non-profits, and disenfranchised people alike.

A particularly important consideration for the government’s analytical effort is to manage the impact of a CBDC (public cryptocurrency) on stable coins and exiting forms of private cryptocurrency.  Private money has been created in a number of ways in the U.S., generally as a response to inadequacies of the public money issued by the federal government.  Once the inadequacies have been addressed, the private money has repeatedly disappeared from the scene until the next failure of currency arises.  (See:  https://www.clevelandfed.org/newsroom-and-events/publications/economic-commentary/economic-commentary-archives/2007-economic-commentaries/ec-20070101-private-money-in-our-past-present-and-future.aspx#:~:text=Coal%20mining%20and%20lumber%20companies,served%20by%20government%2Dprovided%20money.) As a consequence, many cryptocurrency providers and exchanges fear that the public CBDC will crowd out private forms of cryptocurrency.  However, there are plenty of private money lenders in action today and commercial banks also fear they will lose so much retail business to CBDC and crypto wallets rather than bank accounts that their business may be at risk of collapse. (See: https://www.coindesk.com/policy/2022/05/23/wall-street-says-a-fed-digital-dollar-spells-destruction-for-banks/)

Threading the needle between these extreme outcomes will take skill, but it is within the abilities of all of the people and institutions involved to find an approach, or approaches, to regulation that will eventually work.  Imagine instant tax refunds within a few hours of filing deposited into your account, along with rebates and other incentives for using the CBDC ”fed coin.”  What about instant availability of any funds rather than delays for verification as is now often the case, and many more changes that will favorably impact users, holders, regulators, and innovators of the new currency.  We have the ability to work together and shape legislation and regulation that will truly make as big a difference in society and the economy as the internet has since 1990.  I look forward to working to achieve these changes.

∗ Justin Holbein has been active in the blockchain space in many capacities since 2014.  He is certified in data analytics, Python programming and is actively building smart contracts and web3 Dapps. He is an active participant is several Ethereum-based decentralized autonomous organizations (DAOs).  He contributes analysis and uses smart contracts to develop solutions to coordination problems in the DeFi and DAO space.

*James R. Holbein is Counsel to the Braumiller Law Group PLLC. He practices in the area of international trade and customs law, and has written several articles exploring the potential for new digital technologies to reshape supply chains and improve access to financial services.