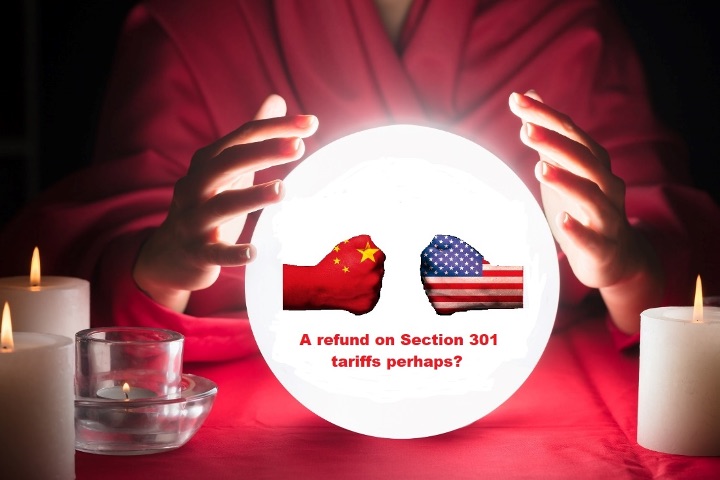 Filing with the CIT Regarding the Section 301 Potential Tariff Refund

On the morning of September 15th our firm released a notification to importers that there was a case filed with the CIT that may possibly pave the way to refunds on the Section 301 tariffs. We expected a fairly decent response, and what we got was 10x’s that in importer’s knocking on our door to file a case. The explanation sent in advance of signing a retention agreement referenced the lead case filed, and that we were tagging along, but that it was not a class action lawsuit, and therefore, each importer needed to file independently. It was obvious to many importers that filing was a “no-brainer” , allowing one the opportunity to be in line to receive the potential refunds, based on what a company had paid out in List 3 and 4a tariffs. We worked diligently, over the next 7 days straight…16 hour days leading up to what we were originally informed was a 9/18 deadline to file, which then turned into a 9/21 deadline, which was then rumored to be a 9/24 deadline due to the technical terms of the statute of limitations. The deadline itself is still in question, but we elected to err on the side of caution and closed our door to any new filings on the 24th. It broke my heart to turn away another 100+ cases, but we did refer them to other international trade law firms, and trust that everyone who wanted to file found assistance to do so. See my colleagues’ article in this same newsletter about the “deadline in debate’: Section 301 CIT Litigation: Current Status and What’s Next?

Now, to be a little more specific on what is considered to be the lead case, a lawsuit was recently filed by Washington D.C. firm Akin Gump on 9/10/2020 in the United States Court of International Trade which is documented as HMTX Industries LLC v. United States, Court No. 20-00177 (a Georgia based importer of vinyl tiles) that challenged the legality of Section 301 retaliatory tariffs imposed by the President on Chinese goods appearing on Lists 3 ($200 million trade action) and 4a ($300 million trade action) of the announced retaliatory measures. It asserts that the Section 301 tariffs on List 3 and 4a goods are unlawful, as implemented in excess of delegated authority, and in an untimely fashion. The Complaint also alleges that both the List 3 and List 4a actions are untimely under the statute, since it took more than twelve months after issuance of USTR’s Section 301 report on intellectual property rights.

The elephant in the room is, does the case therefore have merit? Absolutely. Will there be a good chance of a favorable outcome? The “guesses” at this point range anywhere from a 20% – 50% chance of a favorable outcome in the lead case (yet to be decided by the court), but it’s still very early in the process. To put a little bit more clout behind the filings, the WTO has agreed with China recently that the tariffs on Chinese goods violated international trade regulations and were excessive. In addition, it’s abundantly clear that the trade community has spoken quite loudly as the filing of over 3500+ lawsuits with the CIT in such a short period of time, related to one particular case, has never before happened in the trade industry’s history.

Now that the dust of the original filings has settled, what’s next? What is expected within the coming months is that the Court of International Trade will come up with a “game plan’ to handle the 3500+ (and counting) cases now on record. Implementation of a three- judge panel perhaps to keep the process moving? TBD, like so many other things (break out the crystal ball)

To say the least, the CIT has their hands full with the initial flood of cases. For those who may have missed filing, the question is, is it too late? We, Braumiller Law Group say “no”. Therefore, if you are considering filing List #3 at this time, it’s better to do it sooner, rather than later, as the CIT will eventually determine when the “injury in fact” originated. (When you paid your first tariff, and the damage subsequently was initiated)

I would urge importers to simply take a look at their List #3 and 4a total tariffs paid since 2018, and make a determination if it is worth the financial risk to file…or, a greater risk, to not file, if all of the stars align on this lead case with the CIT. As previously mentioned, but worth repeating, there is a great deal that we don’t know related to the potential outcome of the lead case, so it’s simply an entry fee. Some firms are charging a nominal flat fee as a result, such as ours, so shop around.

We’ve also been asked a lot of questions regarding implementing additional measures in line with ensuring some modicum of success in recouping the tariffs (plus interest) and quite frankly, that is also in debate. Some trade attorneys are advising their clients to also file protests, and that may, or may not, be the right path. Adrienne Braumiller (Partner) and Senior Attorney Vicky Wu, and George Tuttle of Tuttle Law go into detail on that in this article, “To File or Not to File“.

One final note: In the aftermath of all the filings our firm handled, as well as others, I was honestly under the impression I was going to hear the Biden camp, within the first debate, talk about this from the perspective of the sheer number of lawsuits filed against the Trump administration by the Trade Community/American Importers. What? Nothing was mentioned. Then again, it most likely would have been difficult to get through even a couple sentences on the subject before being interrupted.

In the end, what we are telling our clients is that we will keep you posted on the developments in the case. Patience, a true virtue needed in this particular case once you’ve filed with the CIT. It could be 6 months to a year before there is any initial ruling, and then 2-3 years after that in lead case litigation. Just keep doing what you have always been doing for now…and that’s paying the tariffs, and filing for exclusions when there is opportunity to do so.