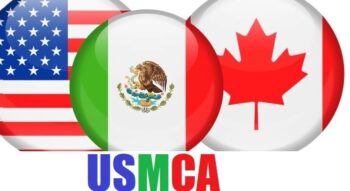 Exporting Under the USMCA. No Problem – Right?

The United States-Mexico-Canada Agreement (USMCA) will replace NAFTA and likely go into effect by Jan. 1, 2021.

Your company exports to Canada and Mexico.  So:

As an example, let’s suppose that Acme Corporation (Acme) in the US is exporting to Trudeau Industries (Trudeau) in Canada.  Trudeau wants to claim duty free treatment under the USMCA.  Would Trudeau have “information, including documents that demonstrate that (where?) the good is originating”?  Not likely. Trudeau could simply sign off on an import certification with no backup documentation and claim USMCA benefits.  Definitely not a good idea because there are some serious consequences for false or unsupported claims as described later in this article.  What is Trudeau to do?  It could turn to Acme for supporting documentation including bills of material, process descriptions, manufacturers affidavits and other documentation to show that the articles exported to Trudeau meet USMCA rules of origin.

Let’s further suppose that Mary Jane Smith is the export compliance person at Acme.  She normally does screening, and EAR and ITAR compliance. Along comes an urgent request from Trudeau for documentation to support the Canadian import claim.  Where will the request from Trudeau wind up?  On Mary’s desk?  Yikes!  Mary will need to do some quick learning on USMCA rules of origin.

What if Acme. as an expedient. simply has an employee sign off on a certification and sends it to Trudeau?  Trudeau could then clear the shipment duty free under USMCA and everyone would be happy.  Maybe not.  Let’s look at the verification and enforcement provisions of USMCA:

The USMCA will impose some hefty requirements on producers, exporters and importers who provide certifications and make USMCA claims.  Whether a company is a producer, exporter or importer they must make sure they have a solid USMCA compliance program, or not pursue any claims for USMCA benefits.