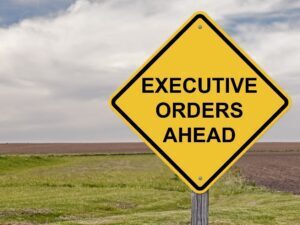 On Friday, January 31, 2020, President Trump issued an executive order reiterating the policy of the United States regarding persons who facilitate imports of merchandise in direct violation of Federal laws and calling for the Secretary of Homeland Security to issue a notice of proposed rule-making to establish criteria an importer must meet before obtaining an importer of record (IOR) number.

The goal of the executive order appears to be to limit the availability of IOR numbers to those who wish to abuse e-commerce and introduce counterfeit goods, narcotics, or other contraband into the United States by making sure that an importer, or foreign exporter, who has been debarred or suspended under one IOR number cannot easily obtain a new one to circumvent customs.

Suspension and debarment actions prevent companies and individuals from participating in government contracts, subcontracts, loans, grants and other assistance programs. Suspension is the preliminary and immediate action CBP takes against importers to ensure the Government’s interests are protected in the event of indictments, fraud, poor performance, or false statements, etc. It is a temporary action pending the completion of an investigation, and any proceeding that may subsequently occur. Debarment, however, is a final decision that renders an IOR ineligible to participate in transactions for a specific period of time.CBP provides additional guidance on the meaning of suspension and debarment on their website, here.

In the call for the notice of proposed rulemaking, the Order states that the criteria must include a special point that “any person debarred or suspended by CBP for lack of present responsibility for reasons related to importation or trade shall be ineligible to obtain an importer of record number for the duration of such person’s suspension or debarment by CBP.”

Then, the Order puts the onus on express consignment operators, carriers, hub facilities, and licensed custom brokers to report instances where a debarred or suspended importer attempts to obtain a new IOR number to re-establish business activity under a new name or address. To ensure conformity with this initiative, the Order suggests CBP consider imposing punishments on express couriers and brokers, etc., such as limiting participation in CBP trusted trader programs, suspending or revoking customs broker’s licenses, or some other appropriate action for non-conformers. In other words, the Order incentivizes express couriers and brokers to report IOR circumvention attempts by creating a punishment for not reporting.

Additionally, CBP and the United States Trade Representative are going to work together to develop an “International Mail Non-Compliance metric” to create an overall compliance score for international posts. Regular reporting of non-compliance and information about seizures and violations related to international mail and express consignments will be published periodically and violations increasingly prosecuted.