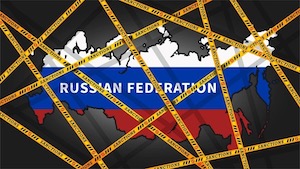 Evaluating the Efficacy of Sanctions on Russia

Since the Kremlin’s February 24th invasion of Ukraine, western countries have put in place extensive global financial ramifications. To gauge the extent of effectiveness, one must decipher the numbers behind Russia’s deceiving published economic statistics. One staggering implication of the trade war with the west lies within the entire collapse of the GDP growth acquired in the post-Soviet era. Sanctions have certainly not only impacted the aggregate of the Russian economy, but also the individuals. According to the Yale school of management’s first comprehensive economic analysis published this July, in 2022, by Jeffery Sonnenfeld, based on an in-depth dive on high frequency consumer data, cross channel checks, releases from Russia’s international trade partners, and data mining of complex shipping data, it is evident that: “business retreats and sanctions are catastrophically crippling the Russian economy.”

Office of Foreign Assets Control (OFAC) sanctions include the designation of approximately 29 individuals and 70 legal entities to the Specially Designated Nationals (SDN) list, as the US Department of Treasury had deemed them integral to support of the Russian Federation’s military industrial complex, and in turn directly the conflict in Ukraine. Additionally, the Bureau of Industry and Security (BIS) issued a new rule adding 36 entities spanning 9 countries to aid the effort to stop American inputs from ending up with Russian military end-users. The direct impact these policies impose on the Russian economy already resulted in a mass exodus from foreign corporations that are said to account for 40% of Russia’s yearly GDP. In addition, the lack of access to foreign capital markets has forced Russia’s commodity-based export market to rely on an Asian-centric approach to sell commodities like natural gas, which of course is being negotiated from a desperate position in Moscow resulting in the unraveling of Russia’s long-term strategic positioning in the commodities market. As Russian gas exports to Europe decrease to near record lows thanks in part to the Nord Stream pipeline’s cease in operation to Europe, the shift to the east as a buyer comes at great consequence. The infrastructure to transport the natural gas that is being built and financed by China is not presently in place. Consequently, China has increased oil purchases at an unheard-of 35 dollar a barrel discount compared to the brent benchmark price demonstrating Putin’s lack of negotiating power. The Russian consumer price index, or the economic measure of inflation, is estimated to be at more than 20% since February, as imports are drastically down including from their closest ally China.

Lack of foreign components for technology have led to much of Russia’s military and consumer struggles. Prior to the invasion, on average approximately 100.000 cars were sold in Russia month-to-month, whereas now only a quarter of those transactions happen. Domestic production without international supply chain inputs have led to Putin suspending safety requirements on cars such as air bags, and anti-lock brakes. In international input import reliant industries like technology, inflation is estimated to range from 40-60% percent.

Unsuccessful import substitution and the exodus of 10,000 foreign companies as well as approximately 500,000 people – many of whom are wealthy and/or highly skilled – has placed Russia in an extremely precarious position. This will likely lead to Russia’s heavy reliance on a Chinese government that does not reciprocate the codependency. Ultimately, the pressures from sanctions have resulted in many supply chain input shortages affecting the invasion, the military infrastructure (especially in aerospace, such as Boeing’s withdrawal both tangibly), and in product support deeming these repurposed plane parts as unsafe. These warnings from Boeing have not stopped airlines like Aeroflot from repurposing parts of planes on hand to continue to operate. Even Pobeda has gone as far as to suspend nearly half of their fleet to service and provide parts for the remaining planes. According to Commerce Secretary Gina Raimondo, there are reports of Ukrainians finding semi-conductors from kitchen appliances repurposed for military use. The overwhelming amount of empirical evidence shows the wide-reaching consequences of the sanctions for not only the Russian government and military, but especially the difficulties for those still living in Russia.