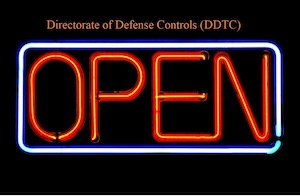 Some may be familiar with Open General Licenses (OGLs) used in the United Kingdom and some other countries. They allow export of dual-use, strategic and other controlled articles to specific destinations under certain conditions.

On July 20, 2022 the Directorate of Defense Controls (DDTC), which controls exports of defense articles and technical data, announced a pilot program under Part 126.9(b) of the International Traffic in Arms Regulations (ITAR) for OGLs applicable to certain transfers and re-exports. The announcement went further and issued the first two OGLs for specific transactions.

What this means it that certain ITAR-controlled articles and technical data can be transferred, or transmitted, without a license or approval. The first OGLs are OGL1 or OGL2 and were appended to the announcement.

DDTC states that it is implementing this program “to further the development and maintenance of a modern and agile export control system.” The agency goes on to state that the pilot program “is consistent with DDTC’s mission of ensuring that commercial exports of defense articles and defense services advance US national security and foreign policy objectives.” The implementation of OGLs could also mean that DDTC may have less approvals to consider.

Before running out and exporting under these OGLs you will want to read the fine print.

First – some general conditions. OGLs cannot be used to export:

Further, any technical data exported or transferred under an OGL is limited to organizational level, intermediate-level, or depot-level maintenance, repair, or storage of defense articles.

So – what is allowed under these OGLs?

OGL1 – This allows retransfers of defense articles to the governments of Australia, Canada or UK, members of the Australian or UK communities, and Canadian-registered persons.

A “retransfer” is defined in Part 120.51 of the ITAR as “A change in end use or end user, or a temporary transfer to a third party, of a defense article within the same foreign country.”

“Canadian registered persons” are Canadian nationals and business entities registered in Canada in accordance with the Canadian Defense Production Act. See Part 126.5 of the ITAR.

OGL2 – This allows re-exports of defense articles to the same Australian, Canadian or UK entities as OGL1

Some further qualifications for both OGLs:

The notice at the DDTC web site asks the question: “Can the OGLs be used to export defense articles?” The short answer is NO.

As can be seen, these OGLs are very limited in scope and apply to specific parties. Will there be more OGLs released by DDTC in the near future? Will they be broader in scope? Will they allow exports from the US? You will need to consult a Ouija Board to find out.