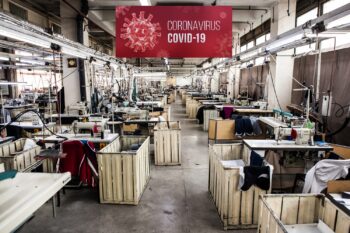 COVID-19 and the Impact on the Asian Apparel Industry

At the time of this writing, it’s not exactly another day in paradise, over 103,000 Americans are no longer with us, there are an estimated 1,500,000 confirmed U.S. cases of the coronavirus, and I am also ballparking at 40,000,000+ unemployment claims filed at the time of this writing, because just two weeks ago it was at 36,500,000. Obviously, it’s not hard to see and hear more gloom and doom in the news about the plummeting economy in the U.S. (Pushing the riots aside for a moment in the news) Right now, just under 20% have filed for unemployment, and I keep hearing the phrase “Not since the Great Depression.” The domino effect has major retailers like J. Crew and Nieman Marcus recently filing for bankruptcy, along with J.C. Penney not far behind, and Pier 1 Imports is now closing all 541 stores for good. (The list goes on).

Some estimates have over 3,600 retail stores in general closing in 2020, many of them in the apparel industry. Granted, many were planning on closing prior to the pandemic, via brick and mortar vs. online shopping, it just happens that the pandemic has moved things along rather rapidly. According to S&P Global Ratings, about 30% in the retail sector now have a credit rating that indicates that they are on the bubble, and stand a good chance of defaulting on their debts, which of course is often followed by bankruptcy or liquidation.

In a global pandemic, such as this one, we (the U.S.) are not the only ones suffering the fallout, as many countries depend on the U.S. for a large percentage of their exports,  and for this particular article, we are going to focus on Asian markets, and apparel, which is a big part of their local economies.

Subsequently, turning one’s eyes to Asia, the same domino affect has developed into a major crisis for Asia’s apparel exporters who, thanks to the rapid globalization over the past decade, employ millions of workers, who were already working in what an expert economist would consider,  some of the world’s most fragile economies.

The first domino fell back in early February with fabric supply shortages as the virus hit China’s $250 billion textile sector. Unfortunately, at the same time that China started to crank things up again for production, demand collapsed as mandatory lockdowns around the globe forced retailers to shut their doors. It didn’t help matters that populations immediately turned to prioritizing expenditures on things like the chaotic run on hand sanitizers and toilet paper in the U.S.

At this time, thousands of factories have been partially or fully closed in Asia as major U.S. retailers have cancelled hundreds of orders, many of which were already in production, (some on a ship already halfway to a U.S. port) leaving factories with no other choice than to lay-off workers in countries like India, Bangladesh, Indonesia, Vietnam, Myanmar, Cambodia, Thailand, Sri Lanka, Philippines, and of course China.

In Indonesia alone, more than 3 million are employed in the apparel sector. In Vietnam, textile industry expert economists estimate that their sector could take a $500 million hit.  In the plight, Force Majeure clauses are being brought to the forefront, and for many companies, it simply comes down to basic business survival going far beyond what are good business ethics. Some companies are working hard to minimize the impact on their suppliers, and keep their relationship intact as they intend to accept all goods that have left the factory, but while many stores have simply shuttered, there is no sign if/when compensation could possibly be completed.

There is of course also growing concern over the spread of coronavirus locally in these areas. Bangladesh and Vietnam have already implemented lockdowns, while in Cambodia, 100+ garment factories have suspended work, with over 70,000 workers affected. Economically, the coronavirus crisis far exceeds anything the garment industry has faced before.

For Cambodia, the pandemic dealt a second blow to its $10 billion apparel sector, which employs more than 800,000, after the EU back in February decided to partially suspend its duty-free access to the bloc over human rights concerns. Vietnam’s baseline 2020 growth is predicted to dip from 7% to 4.9%, Myanmar’s to shrink from 6.3% to 3% and Indonesia’s to fall from 5% to 2%.

Still, the impact of Covid-19 on apparel trade weighs heaviest on China, as they are the world’s biggest textile producer, taking the brunt of U.S. and E.U. buyers cancelling large-volume orders. In the bigger picture some economists predict that COVID-19 could wipe out around 300 billion from the world’s apparel market in 2020.

To break the fall of the economic collapse, in the U.S., at this time we are entering into what we call “Phase 2” for reopening businesses responsibly. (This key operative word “responsibly” varies by state) The same is now happening among those factories throughout Asia, although, a lot of the damage has already been done similar to permanent business closings in the U.S.

The gloom and doom scenarios can be discussed for pages, what is evident for some silver lining in this pandemic, is that the industry can show the world that it can pull together in order to show sustainability in a long term plan, as well as how an industry can bounce back quickly post-pandemic. The International Labor Organization has stepped up, and is pushing for emergency funding to support the workers and factories, as several other coalitions and trade associations are calling on local governments to also step up and pump needed funds into the local economies during the crisis, and assist with them getting back on their feet.

It’s a severe blow to the apparel industry, (like so many others) which would lead one to believe that on the horizon, in order to regain the lost revenue, tariff relief should be part of the “bigger picture package”, along with some additional stimulus aid. As previously mentioned, factories are starting to ramp up again slowly, such as 800 in Bangladesh. The real “wait and see” is worldwide, raising the gazillion dollar question, “Will there be a 2nd wave?” I personally don’t want to think about it. Let’s just get through this first one, and let modern medicine prevail.