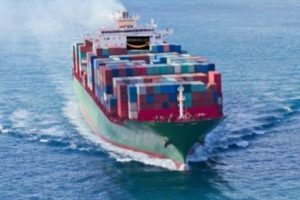 When you look at the breakdown in manufacturing and retail, and what percent of that comes into the U.S. from China, it’s a no-brainer to someone like Jeff Bezos to want to “own” the entire logistics operation of getting product direct from China into an Amazon warehouse, and to your doorstep.

In the world of freight forwarding Amazon is the true “newbie”, but if you look at their track record regarding areas of focus, that title usually doesn’t stick around very long. Amazon has been methodically beefing up its ocean shipping service, (primarily in 2017) sending close to 4.7 million cartons of consumers goods from China to the United States over the past year. I can see Jeff Bezos in the conference room with his top Execs giving them the details on how Amazon branded planes and ships are going to take over the freight forwarding business from China-U.S., which currently (Asia-Pacific in general). represents about 32% of the world’s freight forwarding business. (The largest portion)

I am cheering him on as I quite frankly have a vested interest, from a personal standpoint. Currently, within my Amazon account, I have placed 188 orders in the past (6) months, roughly 40% of products are from Chinese manufacturers, so I am very familiar with the shipping vs. domestic origin. (Some may say far too familiar). What they have done very well is spoil me with the turnaround time to my front door. To the point that I no longer even think about having to shop for an item (most likely made in China) down the street. Get into my car and drive 2.6 miles, why? when I can just tap a few keys, place an order, and take another sip of coffee. Most orders (even the Chinese manufacturers) arrive at my doorstep within 2-4 days. For comparison, I also have a great deal of experience (many orders) on the pure unadulterated direct from China side of purchasing via Jack Ma’s Alibaba behemoth and one of his 17 websites, aliexpress.com. So, I have shopped China direct (cutting out the middle man) finding that the price is in fact right, but the shipping is the proverbial slow boat from that same country. Usually 3-4 weeks. Ugh! Enter Amazon’s resources to build a freight forwarding company from the ground up and the problem of any middle man in shipping and the time lag (and additional cost) is solved, saving many Chinese company sales from non-repeat business when the customer is in the U.S.

Given the drive and ambition of the richest man in the world, and the growth of the Amazon-China logistics to date….it won’t be something the competition will take lightly…….but right now, it’s just a passing glance at what Amazon is acquiring. In the big picture the question is…..where do they sit right now versus the chart of the top 25 ocean freight forwarders in the world? Nowhere. Not yet. They wouldn’t even crack the top 50. However, as of the end of 2018, Amazon’s freight shipping arm has shipped over 15,300* TEU’s from China to the United States. The containers, under the name of Amazon Logistics, or its wholly owned subsidiary Beijing Century Joyo Courier Service Co., are sent from ports in China to either the Port of Long Beach in California, or the Port of Seattle in Washington state, and from there to Amazon distribution centers. The fact is, Amazon can provide seamless end-to-end service for companies that want it, and many do. This can include pick-up at the factory door in China, shipment across the Pacific to a U.S. port, and trucking to Amazon fulfillment centers in the United States, like the (4) 500,000 sq. ft fulfillment centers in N. Texas. (A short trip from my front door). From there it goes straight to my doorstep in 2-4 days. I have discovered that many Chinese manufacturers simply keep an ample supply of the more popular merchandise in stock at the Amazon warehouse.

Just out of the starting gate for ground (and air) Amazon has some catching up to do. Of note, some of the top Chinese domestic carriers, (like Sinotran) have grown their fleet at a rapid pace via the new ship building programs, that Amazon also has the financial resources to acquire. Sinotran recently purchased 4 ships @ $24 million each, (lunch money to Amazon) with the capacity to carry 19,500 TEU’s each. Keep in mind, in addition to their ocean freight vessels, Amazon now has a fleet of (50) cargo jets at its disposal. So, let’s look at the timeline, and make a bold prediction. Amazon entered the ocean freight business in 2016 when it gained a license to lease and resell space on cargo ships running between China and the U.S., but really didn’t make any move until 2017. And now….the top 25 ocean freight forwarders:

So, right now companies who are shipping around 100,000 TEU’s annually would rank around position #44 on the chart. (Ocean freight) Given Amazon’s past ambitions to rule the world, and the subsequent amount of time to actually compete, l would venture to say that they will increase their ocean TEU’s each year by about 20%. So, over the next (5) years that math puts them at roughly 20,000 TEU’s in 2019, and about 45,000 TEU’s by 2024. Not bad for just (5) years in what many consider to be an absolutely fragmented business.

Beyond my “best guess”, a real-world prime example of their rise to power in a particular business sector is their cloud computing, which Amazon launched internally in 2002. Today, it’s estimated to control about 40 percent of the worldwide cloud computing market. What they have done to the retail world goes without saying, but let’s say it anyway.  Amazon’s 2018 holiday quarter sales hit $72.4 billion, up 20% from the same period a year earlier. The end of year surge pushed Amazon’s annual revenue to an impressive $232.9 billion.

To those who are paying attention, Amazon is currently focused on four arenas. They are e-commerce, IT and technology, media and entertainment, and logistics and supply chain. The bottom line, companies manufacturing in China can now sell directly to U.S. consumers via Amazon. That means Amazon is accelerating globalization straight into American households, a straight shot, China to the U.S…A-Z. Impressive. At this time, as far as I know, Walmart has no plans to give them a run for their money in building a logistics empire, and they have a huge foot print in China. (See my last article “What’s Going on at Wally World” I also don’t see the recent distractions in Jeff Bezos’ personal life (Enquirer/AMI blackmail accusation and divorce) as something that is going to be a set back in operations. He’s always been a man on a mission to rule the world. I really thought at this point he would have a “mini-me.” (Insert joint evil laugh between the two here)

*Author estimate based on shipments (TEU’s) from China to the U.S. in the first quarter of 2018.