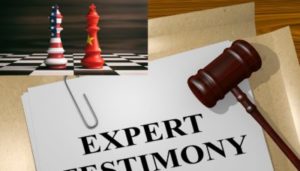 301 Tariff Hearings and the Value of Effective Testimony

In August of 2018, I published an article entitled “301 Tariff Hearings and the Value of Testifying” [see link to previously published article on BLG Newsletter].  This article was based upon my experiences as Of Counsel to Braumiller Law Group, PLLC (“Braumiller”) in working closely with their attorneys to organize, format, draft, and testify on behalf of their respective clients during the 301 “Group 2” hearings in late July before “The Committee” in Washington, D.C.[1]

Shortly thereafter, along with other counsel in our firm, I again undertook the aforementioned process on behalf of additional Braumiller clients, regarding the 301 tariff “Group 3” hearings, in which I testified before The Committee in late August. [2]

As a result of my testifying before The Committee in July and August for Groups 2 and 3, as well as my observations of testimony by other individuals (attorneys and officers/representatives of respective companies), during both weeks of testimony for the respective Groups, I realized an addendum to my July article was well-advised.

The focus of this addendum would be to highlight the importance of a company seeking relief from the potentially financially crippling effects of subsequent 301 tariffs to not only provide testimony before the Committee to personally support the justification for exclusion, but for each company to produce a highly effective witness to testify, in order to maximize the company’s chances at convincing what has proven to be a very reticent Committee to grant such exclusionary relief.[3]

If your company realizes the gravity of 301 tariffs (or similar tariffs which may be assessed in the near future), and undertakes the substantial steps required to legitimately seek exclusionary relief from such tariffs, your company’s plans should include all necessary efforts to insure that the very tip of the spear – the individual who may testify before The Committee for the very brief period of five minutes – is the most qualified and experienced individual possible.

While the above strategy of providing a highly experienced well qualified individual to testify before The Committee may appear self-evident, to the contrary, during the days of testimony I attended in July and August, I witnessed multiple instances where the individuals who testified before The Committee were unprepared, inexperienced and/or generally inappropriately qualified for such a critical assignment.

Testifying Before the Committee:

As noted, through the first three Groups of 301 tariff hearings, The Committee has demonstrated a near extreme reticence to grant exclusionary relief to several (in my opinion) companies which have satisfied the requisite elements as set forth by the Office of the United States Trade Representative (“USTR”).  As a result of The Committee’s decision-making history throughout the summer of 2018 regarding all three Groups, the in-person opportunity to not only provide testimony before The Committee, but to respond to cross-examination by one-or-more of “The Committee Members” may be a critical element in the decision-making process of The Committee.  Due to the time frame structure of the testimony, The Committee Members’ are not afforded the luxury of time to cross-examine each witness in each group of eight, and as such, it is critical to structure the written statement drafted for testimony in a way that may best elicit questions from The Committee.

Such questions are essentially the only bell weather available to the counsel and client to gauge The Committee’s interest in the arguments set forth during testimony and if successful in eliciting one or more questions, can result in The Committee requesting specific additional follow-up information, which may further support the positions set forth in the testimony.  This opportunity of The Committee to propound follow-up questions through cross-examination requires the representative testifying to not only be fully appraised and educated as to all issues and elements, but to be able to answer such questions immediately in an improvisational manner.

Simply put, knowing the correct answer to a question under cross-examination and being able to cogently and succinctly state the correct answer during the real-time response requirements before The Committee, on the public record and in the presence of an estimated one hundred people attending testimony in the room, is quite another thing.

Choosing Your Company’s Witness for Testifying Before the Committee:

Before you, the CEO, President, CFO In House Counsel or assembled board or sub-board for your company decide who the “Potential Witness” should be to testify before The Committee, the decider(s)/deciding group should the following questions;

Choosing Braumiller as Your Company’s Law Firm and Witness:

Braumiller is a boutique international trade law firm, based in Dallas, Texas with counsel located in Los Angeles, San Francisco and Ohio.  Braumiller recognizes the value of drawing from different legal talents and areas of their attorneys’ practices in representing clients who are facing the very real and substantial risks to their businesses due to 301 tariffs and other similar tariffs which may be instituted in the future.  This breadth of legal experience ranges from counsel who are also metallurgical engineers, patent attorneys, to myself, who has more than two decades in both U.S. litigation and arbitration, as well as international arbitration first-chair experience.  Braumiller counsel work in concert, in order to provide our clients with the most well-rounded representation and present the most succinct and compelling arguments to The Committee, in seeking exclusionary relief from such tariffs.

If your company is facing (or may be included in any future 301 tariffs or other similar tariffs in the future, the historically short windows established by the government for validly responding and entering into the exclusionary relief process require such matters to be addressed by your company as soon as possible.  Feel free to call Senior Partner Adrienne Braumiller or myself, S. George Alfonso, Of Counsel to the firm, to discuss your company’s current or potential situation.

[3]. In light of the administration’s rhetoric regarding the imposition of tariffs, this fast-tracked process of written statement and testimony before The Committee is a model which, having been created and instituted, in all likelihood, will be revisited multiple times in the coming months.  Familiarity with this process may be of an invaluable resource should your company’s product or components become the target of such substantial tariffs in the future in a potential “Group 4” (or subsequent) round of 301 tariffs.

[4]. The testifying representative is not required to be a licensed attorney.